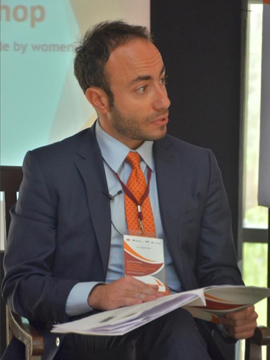 Mr. Carmine Soprano is an economist, academic lecturer, and independent advisor with 12+ years of experience working in the international development industry within international financial institutions (IFIs), UN agencies, CSOs and the private sector.

He is also currently a member of a team of economic experts advising Italy’s Ministry of Finance on G20 presidency matters, where he leads international engagements related to sustainable finance, among other things.

Before joining the World Bank Group, Mr. Soprano held a variety of positions within the Inter-American Development Bank, UN agencies (UNECA, UNCTAD, UNDP), as well as international NGOs and the private sector. Cumulatively, he has worked in 30+ developing countries across Africa, South Asia and Central/Latin America throughout his career.

Mr. Soprano is also an academic lecturer at ‘’Tor Vergata’’ University of Rome, Italy, and has taught at other prestigious Italian institutions such as LUISS University and SIOI (Italian Society for International Organizations). He is a regular speaker at international conferences and symposia.

He also conducted studies at the Universitat Autónoma de Barcelona (UAB), Spain, and was a visiting researcher at the Universidade Federal do Rio de Janeiro (UFRJ), Brazil. He is currently enrolled in the Executive Master of Public Administration (EMPA) at the London School of Economics and Political Sciences (LSE) in London, UK. Mr. Soprano speaks fluent English, French, Spanish and Portuguese in addition to Italian, his mother tongue.

As freelance journalist & blogger, Mr. Soprano is a contributor to the World Bank Group’s and the World Economic Forum’s blogs, as well as to Corriere della Sera (Italy’s leading newspaper).

Additionally, he has 20+ years of experience of playing violin at semi-professional level, performing with orchestras in Europe and the Americas – he is currently the co-founder and President of ‘’Orchestra Arcus Regalis’’, a Rome-based orchestra affiliated with the city’s ‘’Santa Cecilia’’ Conservatory.

ItalyUntold is a Think Tank aiming at revealing the unknown the excellences, innovation and primacies of Italy to both the international community and the Italians themselves, in order to enhance the country’s economic, cultural and social system.

We are a group of experts in communication and international relations who have been interacting with institutions, the business world and stakeholders for decades.

Members are the beating heart of the Think Tank, passionate about our Country, they share the will to tell a controversial story, those of an Italy of primates and excellence unknown to most.